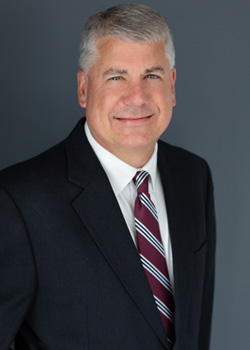 John is an FPH&A Principal serving main-street businesses, as well as government contractors, technology, and bio-technology accounts worldwide. Starting as a Field Underwriter for Nationwide Insurance in Gainesville, Florida, John quickly was promoted to a Personal Lines Underwriter within the regional branch. But he was eager to return home to Huntsville when an opportunity to join FPH&A became available in 1991, where he has worked for the past twenty years.

John also is an FPH&A Commercial Lines Manager, providing oversight to all the account managers within the agency and serving as a liaison between the agency and all insurance companies.

John is the 2012-2013 President of the Alabama Independent Insurance Agents (AIIA), where his duties include increasing membership, lobbying in favor of “pro-business” legislation on the state and national levels, and negotiating with vendors to provide more services for the member agencies within AIIA.